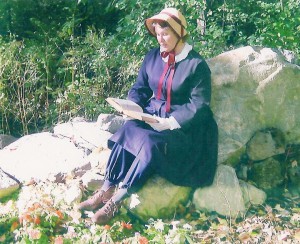 “Make the world a better place.”

Lucy Stone (August 13, 1818 – October 19, 1893) has often connected with Karen Board Moran across the centuries beginning  during a 1991 National Endowment for the Humanities Fellowship at Harvard.  Stone had overlooked the Mississippi River at LaCrosse, Wisconsin during her lecture tour in 1856.  Over 100 years later Moran also enjoyed that view at the University of Wisconsin-Lacrosse where she earned her B.A. in Physical Education and History in 1968.

Moran did her student teaching in Viroqua, Wisconsin (where her great grandfather earned his teaching degree three generations earlier).  It was here on 4 July 1856 Lucy Stone “Morning Star of the Woman’s Rights Movement” delivered the first woman’s rights address and anti slavery speech ever given by a woman in the great northwest. The platform broke down. Rising unhurt she cried “So will this nation fall unless slavery is abolished.”  Stone owned property in this area.

Armed with a  M.Ed. in History from Worcester State College in 1989, Moran started developing lessons to engage her students and fellow teachers in finding women’s stories from the past.  She helped students understand why the “bloomer” costume was so much more freeing that wearing a skirt covering 15 pounds of petticoats and a tight laced corset.

When Moran retired to Tucson, Arizona in 2005, she was delighted to discover Lucy Stone’s reach to the southwest.  Two years before her death, Stone had sent Laura Johns of Kansas to work with Tucsonan Josephine Brawly Hughes to help form the Arizona Territory Equal Suffrage Association (1891) as part of the National American Woman Suffrage Association’s effort to gain suffrage for Arizona women. 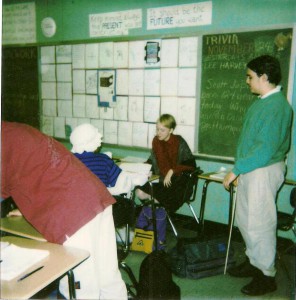 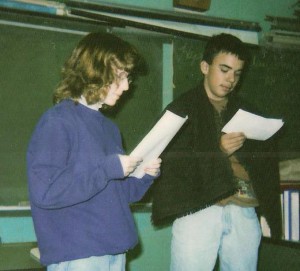 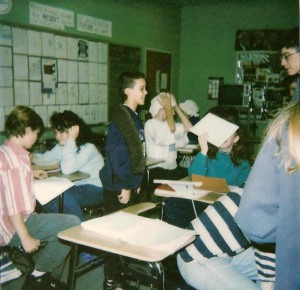 1) Have eighth grade students take on the roles in Scene 7 “Mother’s Flag“ of Maud Wood Park’s Lucy Stone: a chronicle play. Students hear the language of the day as the Committee on Constitutional Amendments hears the arguments for and against House Resolution No. 325, providing for the submission of an amendment to the State Constitution to give the women of Massachusetts the right to vote in all elections.  Massachusetts was home of the oldest and most influential anti-suffrage organization of women in the United States.  At the time of the scene in 1903, only four states had the vote: Wyoming, Colorado, Utah and Idaho.  A similar scene occurred in every state!  There are 19 parts plus a narrator which the teacher could read.  This lesson requires students to stand when testifying and listen carefully to every speaker so they can determine who are the main groups, who had the strongest argument and which committee member was pro suffrage.  It was helpful to pause after each speaker to note the specific argument and the teacher should determine if there are words that need definition for the class.  Massachusetts was the 8th state to ratify the 19th Amendment to the U. S. Constitution on 4 June 1919 with 47 voting against in the House and 5 voting against in the Senate.  Gaining the right to vote for women was a long battle!  This lesson shows:

2) Herstory via Lucy Stone as an English/History Team Unit

History classes tie the story to a previously viewed video on the life of a young girl and boy at Old Sturbridge Village and filmstrip “Mill Girl and a Lady” to Lucy’s early life. [first ten pages of biography]

Day I Discussion:  What work was available for girls in New England in the early 1800s?  How was Lucy different from other New England girls?  The same?

Homework Assimilation:  Describe an event in Lucy’s early life that impressed you to a friend in a letter and explain why.

Homework Assimilation:  Read 1848 “Declaration of Sentiments” in your text.  Which two rights do you think Lucy would most strongly support.  Explain why.

Day III Discuss homework opinions.  What does Lucy do to bring about change? ( Use pictures of bloomer costume, National Convention Proceedings, etc. to steer discussion.) [last eight pages of biography]

In small groups compare reactions and accounts in Worcester Spy and New York Herald of the first National Woman’s rights Convention held in Worcester, MA on October 23 and 24, 1850.

Homework Assimilation: Read the section in your text about the period reform movements.  Briefly describe each reform giving the leaders and methods used to bring about change.

Day IV  Choose one reform movement from last night’s reading–suffrage, education, dress, abolition, temperance,  Write a speech, editorial or draw a broadside to win over the class to your cause. 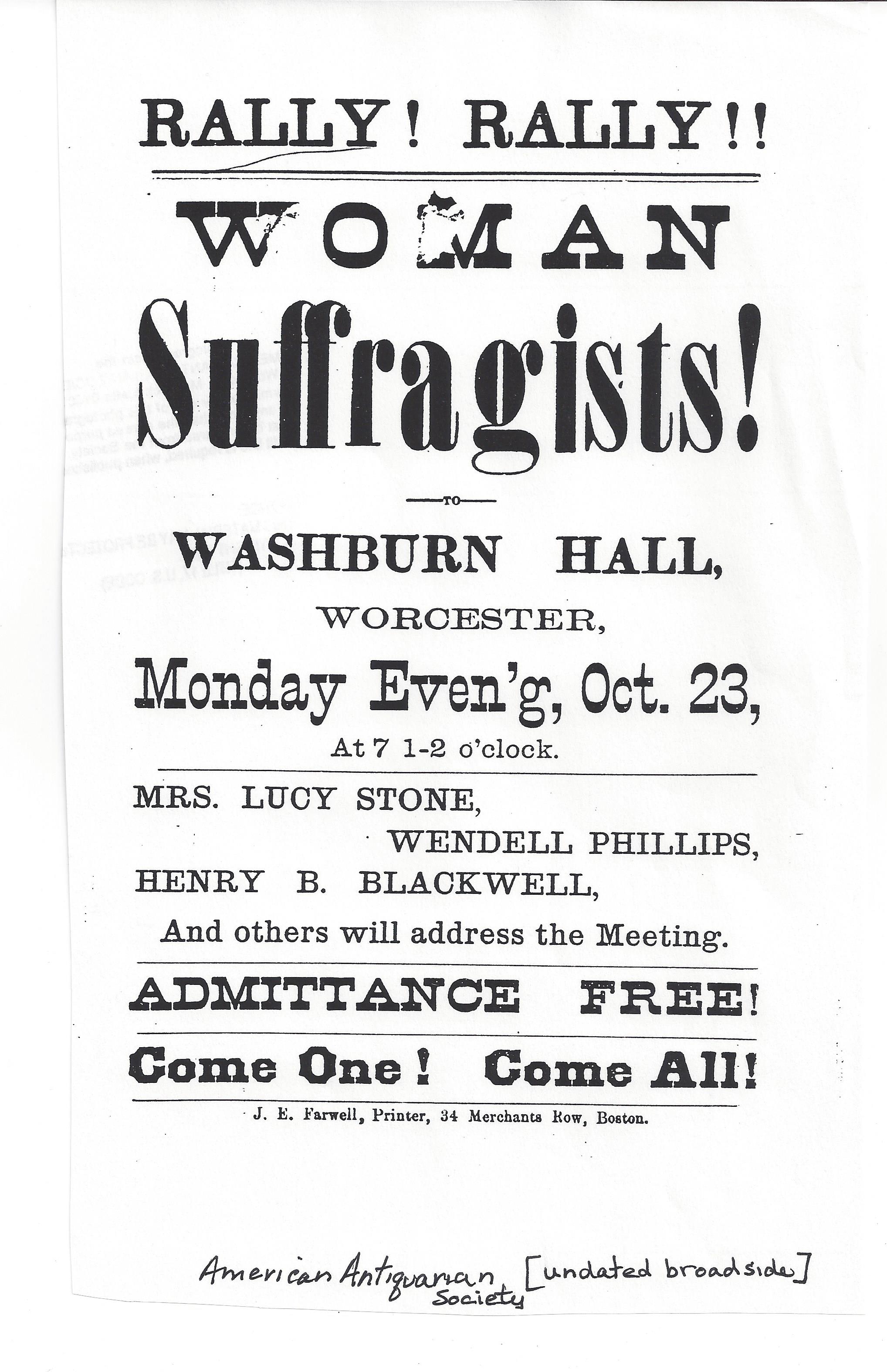 The Proceedings of the Woman’s Rights Convention.  Boston: Prentiss and Sawyer, 1851.  Available at Schlesinger Library and online at Worcester Women’s History Project. 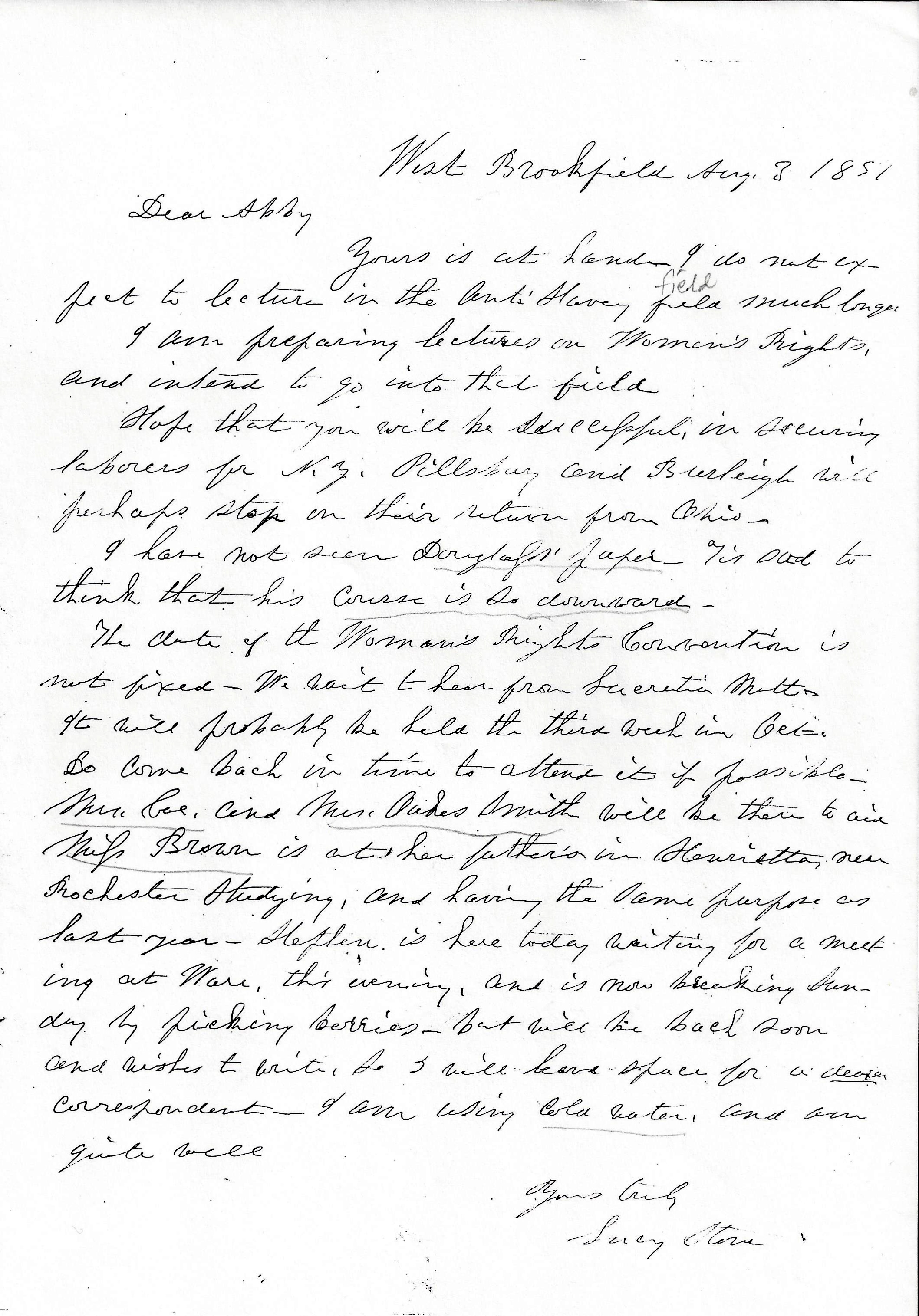 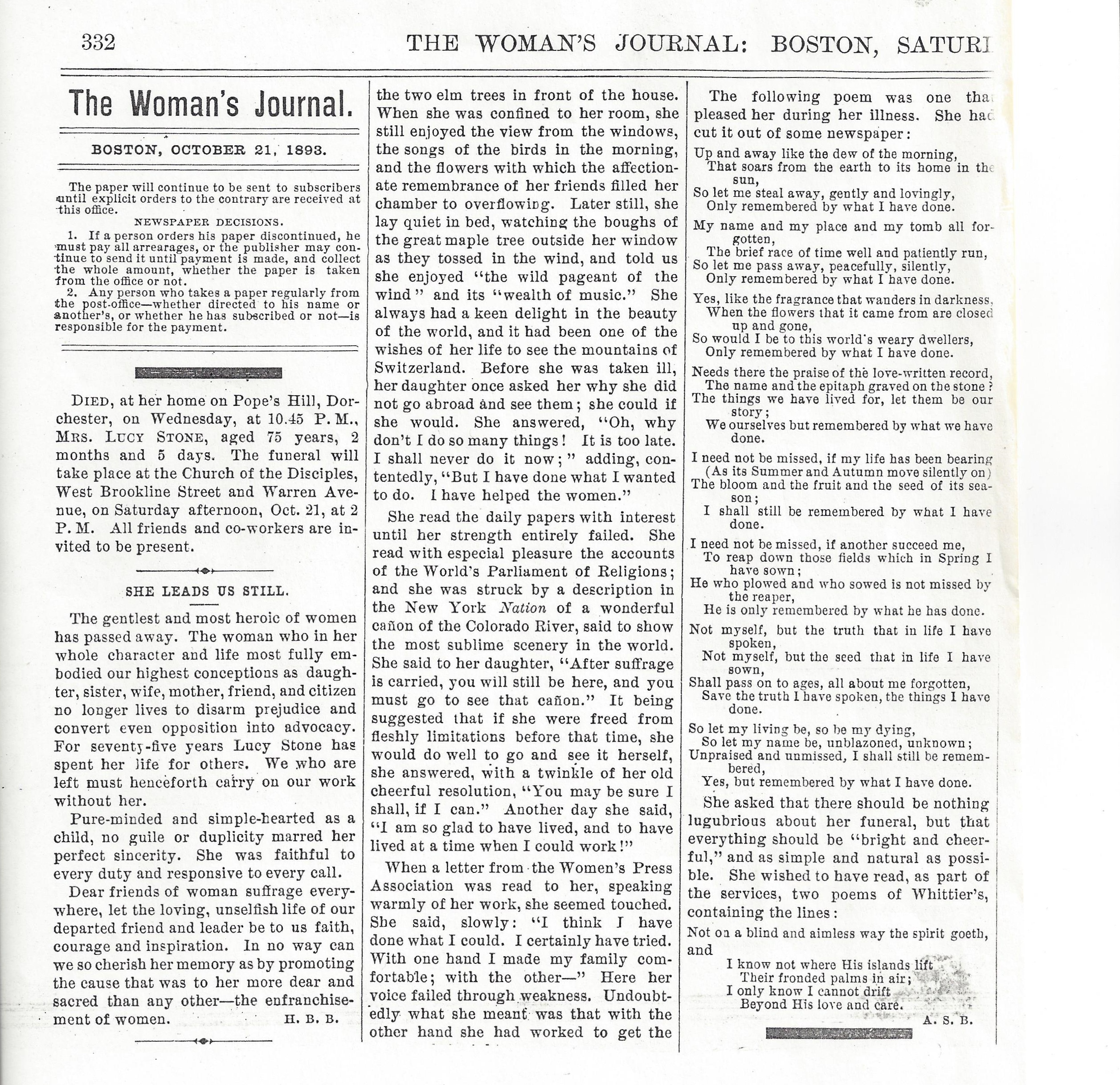 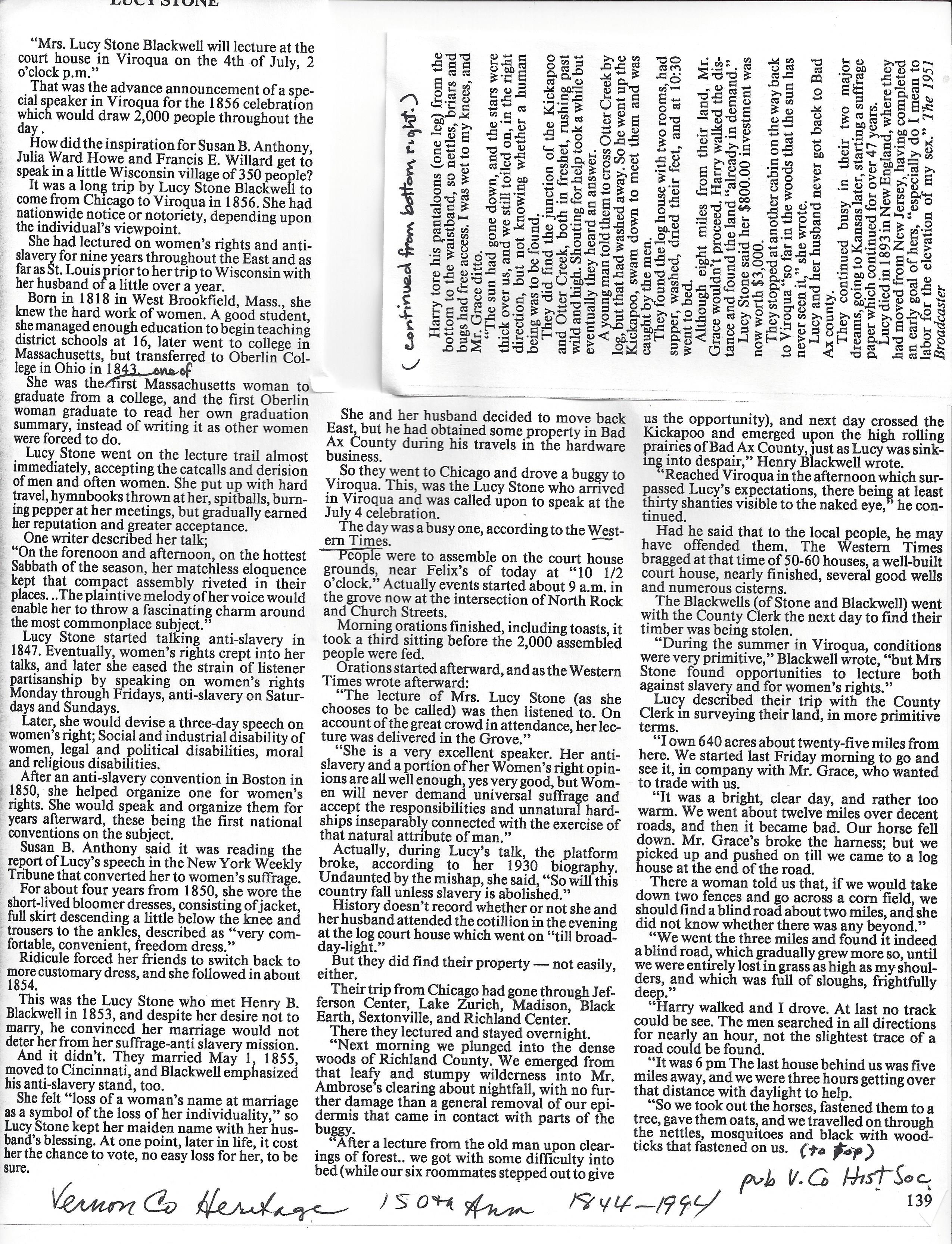