Warning: session_cache_limiter(): Cannot change cache limiter when session is active in /home/public/site/wp-content/plugins/cforms2/cforms.php on line 83
 Publications | Window On Your Past 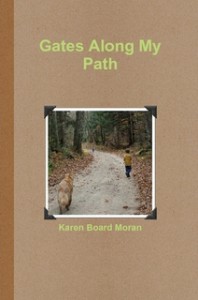 Gates Along My Path  by Karen Board Moran

This historic fiction from a young adult view set in mid-19th century Worcester, Massachusetts, illustrates the impact of the first National Woman’s Rights Convention held there in 1850 on both the town’s children and all of us today.

How does one go about choosing the right path to travel through life– especially when you are under the age of twelve and a female?  Liza makes her life changing decision, but will it be the best choice?

“Retired teacher Moran combines fictional members of a poor Irish family with real life figures in 1850s Massachusetts to illustrate the status of women and children in a culture that is just beginning to reevaluate its treatment of both.  In an unusual move for fiction, she uses footnotes to verify facts.”  (6 July 2014, E3, “Southern Arizona Authors” Arizona Daily Star)

“Take this train to Worcester, 1850-  I enjoyed this book very much–it is well-documented historical fiction.   Aimed at a young audience, eleven-year-old Liza’s encounters with other real and fictionalized Worcester characters will no doubt also appeal to many adult readers, who will get a feel for the mid-nineteenth-century city through the eyes of an orphan child.  An immigrant Irish girl, not sure where she belongs, begins to consider her options from the margins of a community that includes social reformers, abolitionists and woman’s rights activists, such as Stephen and Abby Kelley Foster.  Possibilities may be limited for Liza, but local families who contribute to the care of the orphans provide a range of examples and a window into the lives of other Worcester children on various paths to adulthood, including those preparing to become laundry workers, candy shopkeepers, and elite educated professionals.  I just love the way this story weaves historical facts with an intelligent and wise imagination–including helpful footnotes that clearly point out the difference.  Good idea to put a glossary in the back, too.  I could see a young reader becoming really interested in history, and being motivated to learn more from reading this book.”  (1 December 2013 posted on Amazon.com)

“Enjoy a good read? Gates Along My Path defies time. While it is set in the 1850s, young adult readers will find its theme applies even today, as a young girl tries to find her path into adulthood at age 12. For adult readers the story takes you back to when you were facing the same difficulties of growing up. You had more time to mature into adulthood, while these children did not. Decisions that impact your life are never easy to make, especially at a young age. Having taught young adult literature I can assure you that this will catch the imagination of young readers. It is well documented with original pictures and footnotes explaining the terms and conventions of the time. It is placed at the beginning of the women’s rights movement with issues as current now as they were then.”  (19 Nov 2013 posted on Lulu.com)

“Combining equal measures of historical research and historical imagination, Karen Board Moran has created a fascinating novel for young readers. What was it like to be Liza, a young Irish immigrant who lost both parents to accidents on the same day? Where would she and her sister and brother turn? An older sister, Mary, had found work with the Worcester Children¹s Friend Society, an orphanage in central Massachusetts, and she arranges for her siblings to join her. Settling down in Worcester just begins Liza¹s adventures, adventures that reveal much about life in mid-nineteenth century America.

As the reader follows Liza¹s story, she encounters the story of Moran¹s research on the 1850 first National Woman’s Rights Convention. The book not only has a multitude of contemporary illustrations, it has footnotes in which Moran tells us where she found the materials that make up the texture of Liza¹s life in Worcester. Readers with an interest in the past as well as readers who like good stories will find Gates Along My Path enthralling.”   (5 November 2013)

“Every story has a conflict and hopefully every character has someone who helps open the gates along their path.  I was born in Worcester, educated in Worcester and have lived near Worcester all my life…Many people helped me along the way…I am somewhat like the main character.”  (20 October 2013)

“Gates Along My Path is a historical narrative, following the lives of girls who have very few options for survival in the 19th century United States. The reader is introduced to some of the brave women’s rights leaders of the 19th century, who risked everything because they knew that oppression of any kind is the bane of a society that considers itself a democracy. Contrary to popular perception, some of those brave people also happened to be men. Gates Along My Path is a vital read for anyone needing a primer on the strides and daunting obstacles that women have experienced in the last hundred or so years. It is amazing how quickly some episodes become ‘distant history.’ Recommended for young adults, as well as anyone in need of some historical context.  Contains reference list of period vernacular.”  (19 July 2013 posted on Lulu.com)

“What would your life be like if you didn’t have choices?  In 1850, if you were a slave, an orphan or a girl–you didn’t!  Discover with Liza the people she meets or learns about who are responsible for many of the choices available to us today.  Well researched using primary sources, this history lesson makes a very interesting read.”   (5 May 2013)

“I had never heard about the first National Woman’s Rights Convention before reading Gates Along My Path.”  (5 April 2013) 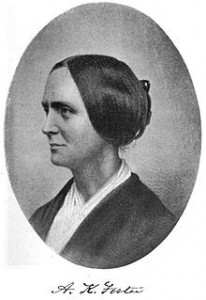 by Karen Board Moran and Carolyn Howe

Click here to book a presentation of the one woman play.

Classroom materials were created by Claire Berkowitz and Karen Board Moran.

“Window on the Past: Revisiting the First National Woman’s Rights Convention” (2000) 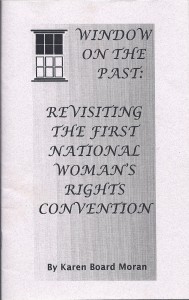 A classroom script based on historic documents with student materials. 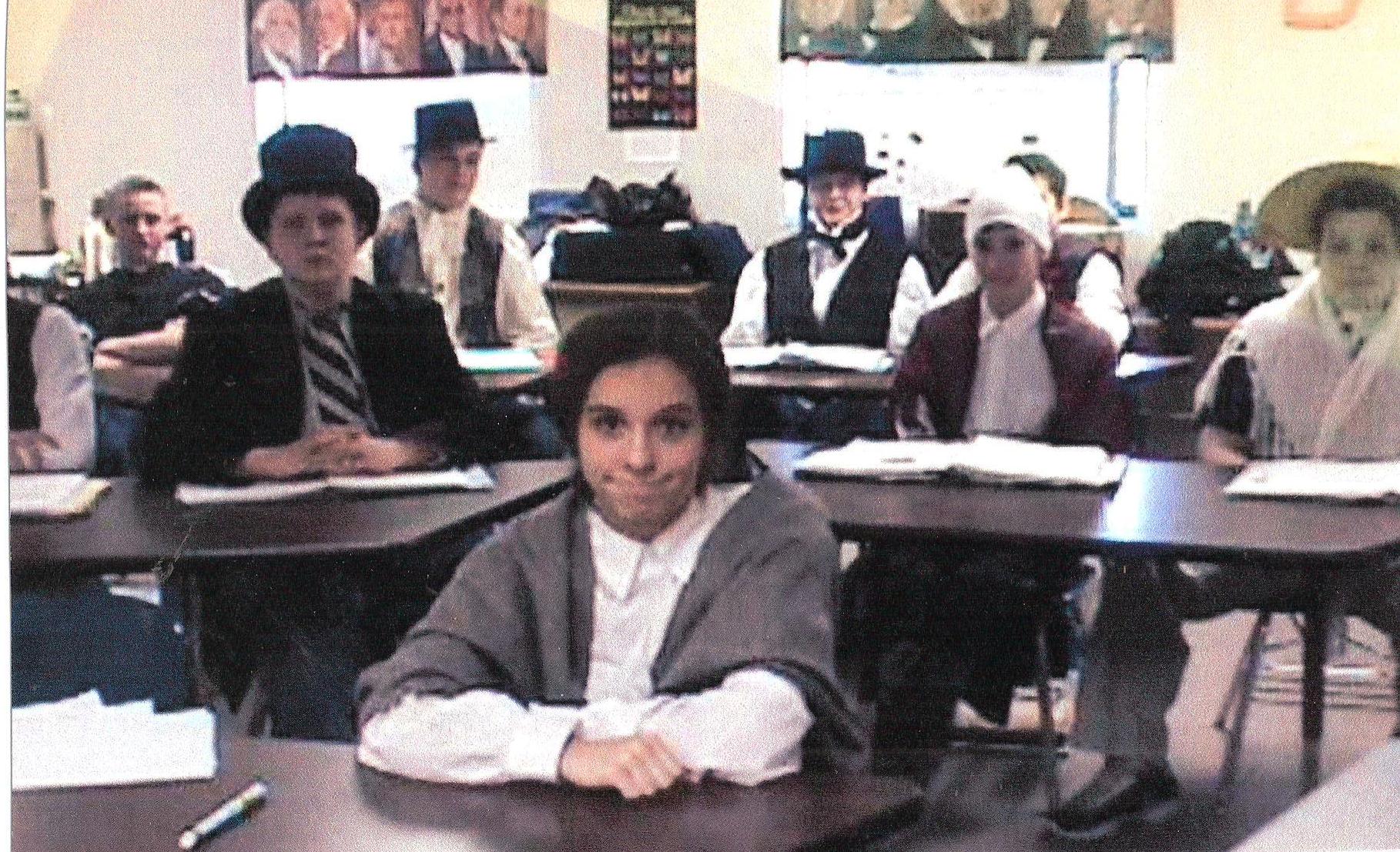 This pamphlet has been used for information in a dramatization in 2004. 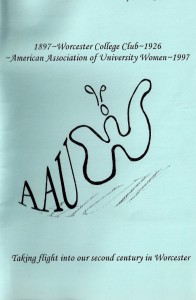 History of the American Association of University Women- Worcester Branch, 1897-1997.

Compiled and published by Karen Board Moran and the Centennial Committee: